Introduction: Austrian to Austria and Croatia

After five beautiful days on the Croatian coast, it was time to head to Austria. We tried to find flights into Salzburg, but due to the fact that we were flying Austrian through Vienna on the flight in and the fact that Salzburg’s airport is pretty small, we could only find flights into Vienna. (At least we got to drive by the great Austrian scenery!)

But back to the trip.

During check in, we asked if the four of us could be seated together, and were given seats in Row 4, right behind the intra-European business class cabin (just Economy with a blocked middle seat). These seats had an amazing engine view (which because I fly economy I don’t otherwise get)

Split Airport was small and crowded. There wasn’t much to do, either (besides the limited planespotting, of course 🙂). There was a duty free shop, and there may have been a business class lounge as well (although not for Priority Pass).

I witnessed my plane landing, but couldn’t catch a shot of it. However, I did catch this picture of the plane taxiing. 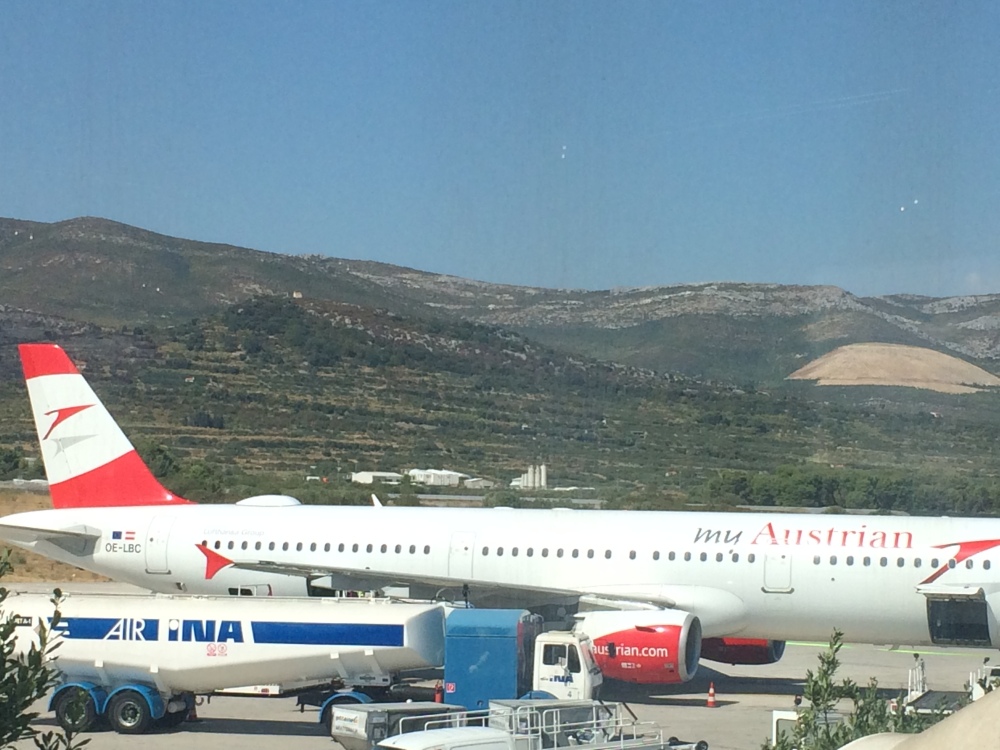 We departed from a bus gate, which was great because I could capture this photo: 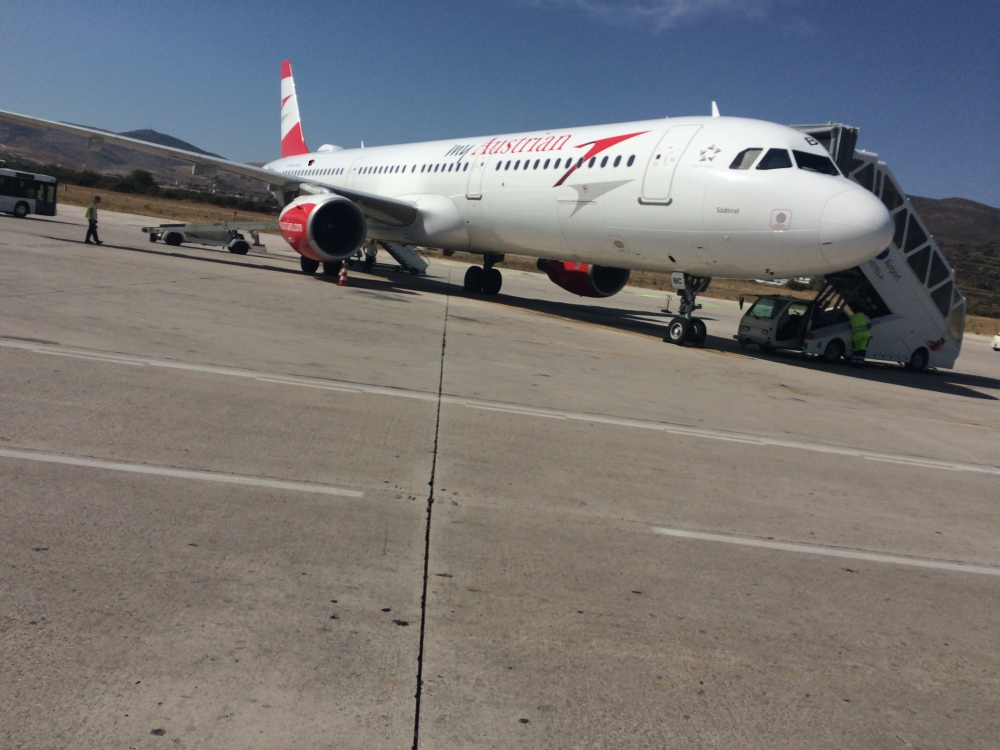 The first thing I noticed upon taking my seat was that the legroom seemed endless. This was possibly the most legroom I’ve ever flown with. However, Seatguru lists these seats as having 30 inches of pitch, which just didn’t seem right (even with the seats being  the new slimline type).

My guess is that we were seated in seats normally assigned to Business Class passengers. Here is why:

Maybe Austrian was expecting more Business Class travelers to fly, but when they did not get that many passengers, they opened up those seats to us. It is just a possibility which may or may not be true, but either way, it definitely felt like there was more legroom allotted to me than on the flight in.

As a bonus of being in the first row, I got a great engine view, which (like I mentioned earlier) I don’t ever really get in Economy.

The flight took of on time. The views after takeoff were beautiful.

First, let’s check out the inflight magazine. The magazine, called Skylines, seemed to have some interesting articles (although many of them were in German). According to the magazine, you can also buy tickets for the CAT (City Airport Train) on the flight, which could be useful if you are time constrained.

Service consisted of the same pretzels I had on my previous two flights and a drink. I chose Coke.

Just like on all of the other Austrian flights so far, the flight attendants were great and were always ready to serve you if needed. They also smiled while serving you.

Soon we started our descent, which was beautiful, just like on the way in.

We touched down on time, and taxied towards Concourse G.

Immigration had no line, and we picked up our rental car and were driving towards Salzburg in no time.

Overall, this flight was pretty much exactly the same as my Vienna to Dubrovnik, including with the service. Compared to other European short-haul flights, this flight was fine. They got us to Vienna on time in an extremely comfortable seat with relatively good service. That is what really matters.

Thanks for reading, and stay tuned for the final installment in this trip report, Vienna to Newark, coming soon!