Good morning everyone, and finally, welcome to another flight review! I’ve obviously taken a break from the blog for the start of the school year. I will continue to post as much as possible now that the school year is well-underway and I am settled (school comes first, after all).

Today, I will be reviewing a flight I took over Christmas break. On this trip, first, we went to Utah to go skiing, and then stopped by Florida to visit some family members and enjoy the New Year’s Eve celebrations. This review will only be covering the first flight.

We arrived at Newark Airport’s Terminal C with plenty of time to spare before our flight. We checked in using the kiosks, and found it easy to print out our boarding pass and tag our bag to be checked. The checked bag cost $30, the same price as all other legacy US carriers.

Security was crowded, which made sense, considering it was peak Christmas travel season. Our flight was at gate C86, which was quite a haul from the security lines, as it was located on the opposite side of the concourse. 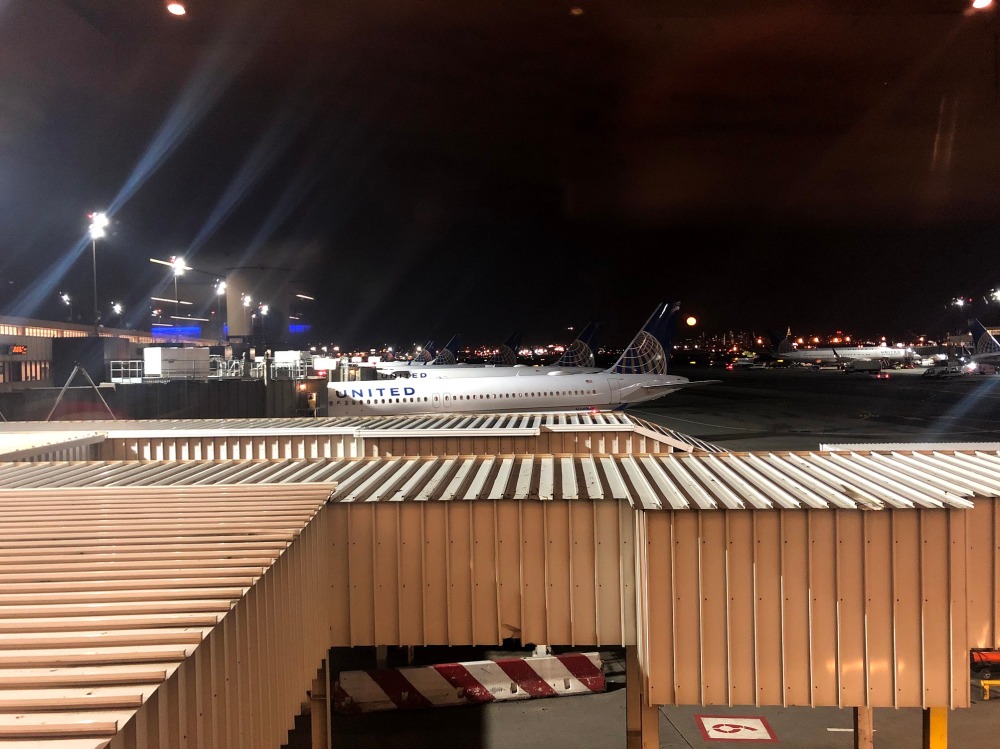 Our aircraft was already waiting for us when we arrived.

Anyways, given that we were seated near the back of the plane, we were in Group 3, the earliest standard boarding group on United. Although I don’t have a picture of it, I really like the clarity the standard boarding signs and lines of United, even if it causes a lot of gate lice! 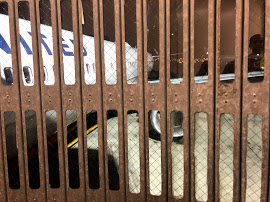 Upon boarding, the first thing I noticed was that this plane was configured with the Boeing Sky Interior, and United’s new seats. This made sense, considering the plane was only built and delivered to United in 2013.

It meant that there was some super cool and relaxing blue mood lighting. 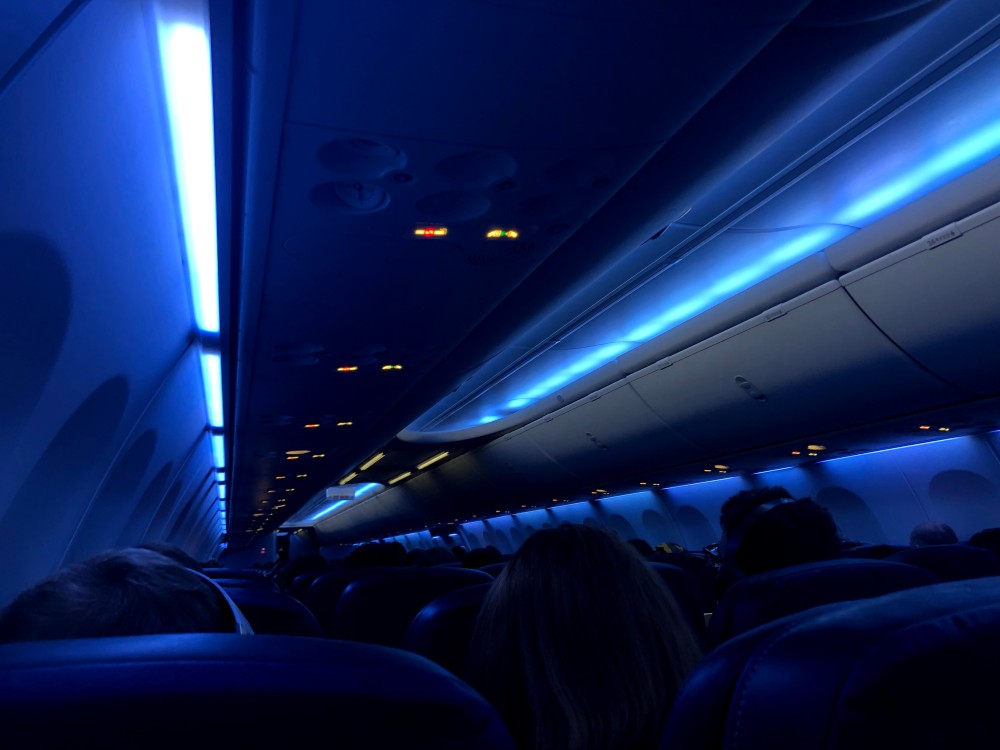 The next thing I noticed was just how tight the seats looked in Economy. this was confirmed as soon as I sat down in my seat, 36A. According to most sources, the seat had 30 inches of pitch, but even with the slimline seats, it felt tight. I was around 5’7 at the time, and my legs were nearly pushing against the seat in front of me.

On top of the tight legroom, the recline was nearly nonexistent.

There was a sturdy adjustable head rest on my seat, which definitely could help if you wanted to sleep.

Overall, the seat comfort was slightly below average, but not that different from pretty much all new planes on the three legacy carriers in the US nowadays.

On the bright side, the plane had WiFi, and power (two 110V power ports for every 3 seats, but no USB ports). It also had the ability to stream content to your own device for free, which worked perfectly. I will go over the content more once we are in the air.

There were also individual air vents at every seat.

The captain announced our estimated flight time of 4 hours 39 minutes, about half an hour less than normal.

Before we knew it, the safety demonstration was happening. The plane pushed back at 7:16 PM, just one minute behind schedule.

I really liked the look of the split scimitar winglets, which are designed to lower fuel emissions.

We taxied to Runway 22R, and were quickly cleared for takeoff. We lifted off at 7:34, and made a sharp right turn West. The night takeoff footage was really bad, so I won’t be posting it here.

The seatbelt signs weren’t switched off until nearly 20 minutes after takeoff.

In the seatback pockets, there was the safety card, the inflight magazine, and the buy-on-board menu. Only small snacks were served; more substantial food had to be payed for. 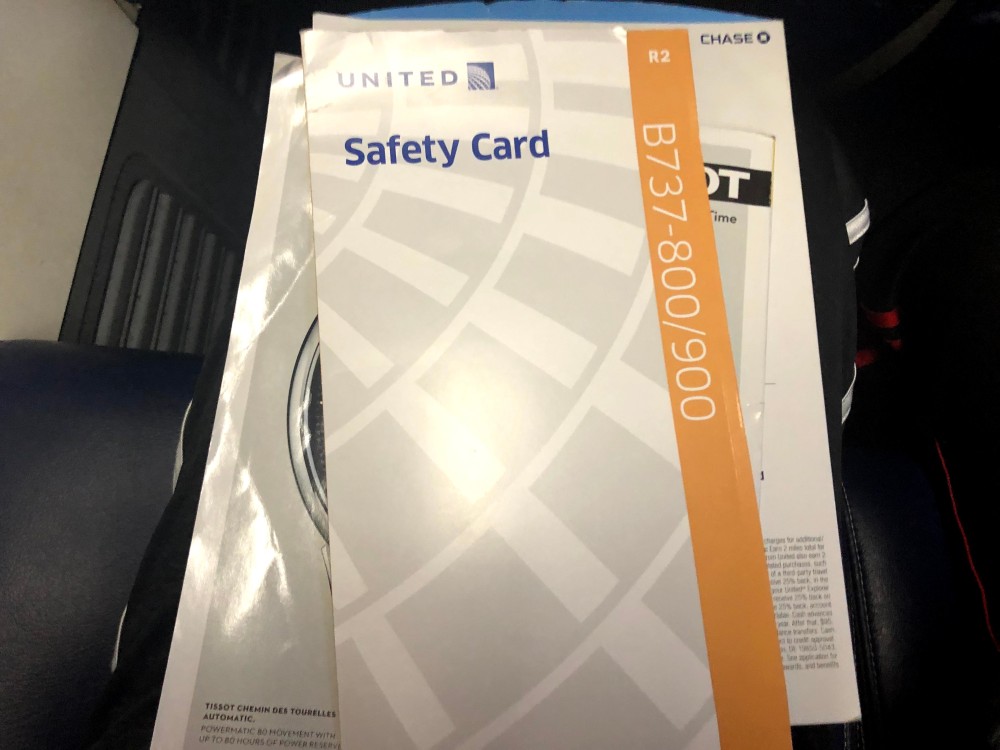 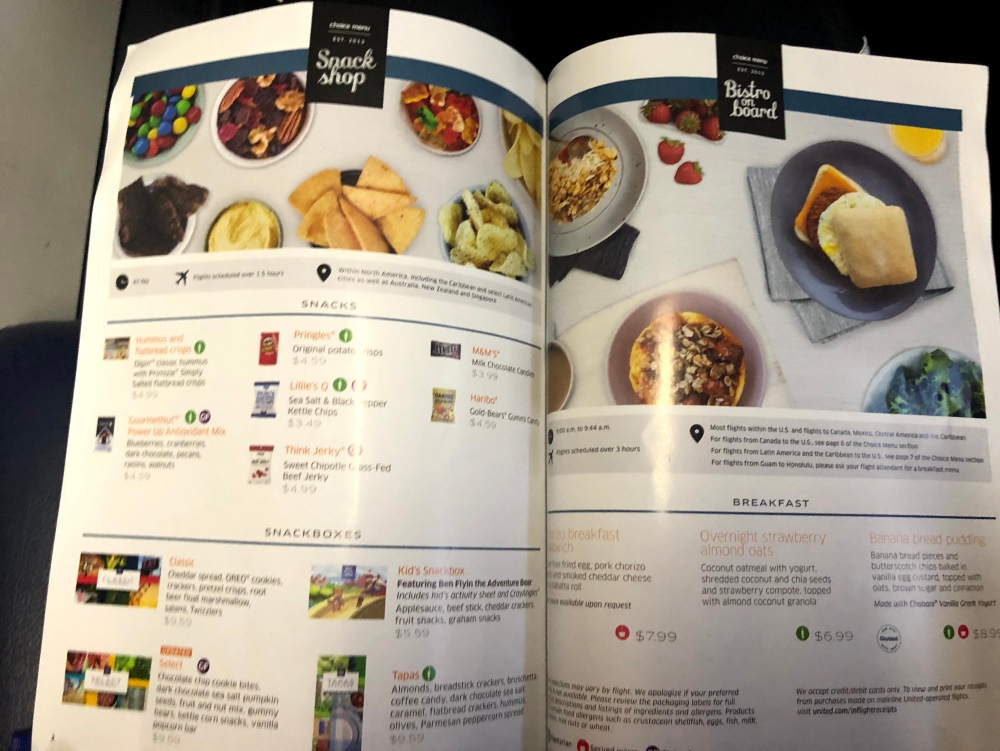 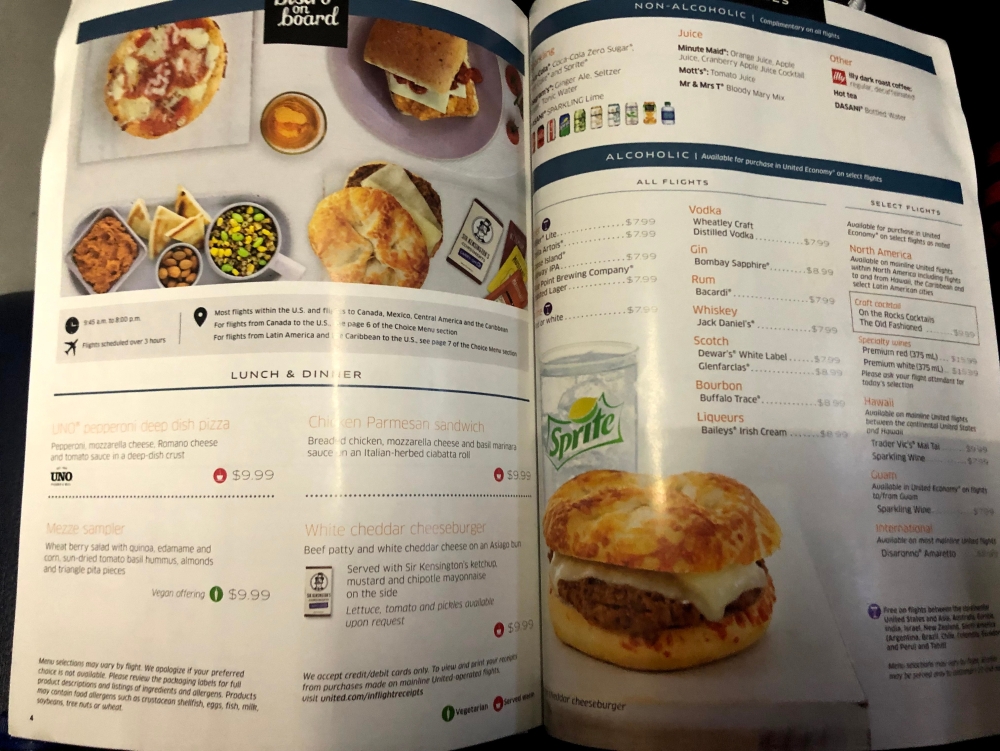 The complimentary snack, a pretzel bag, was given out around 75 minutes after takeoff.

About an hour later, I decided to order something to eat from the menu. I got the chicken parmesan sandwich for about $10, which was actually pretty tasty. As an added bonus, even though it probably wasn’t the healthiest thing in the world, the ingredient list did not look like a science experiment (which I can’t say for some other inflight meals). 😉 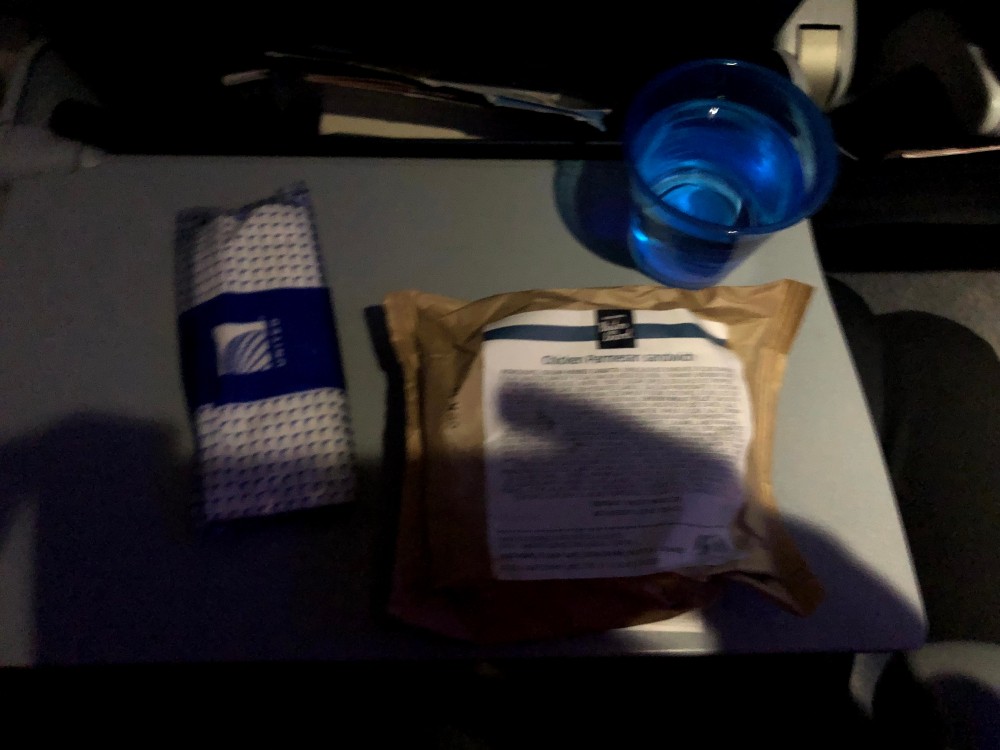 Let’s go over the inflight entertainment. While United offers LiveTV on their older (ex-Continental) 737 fleet, it is not installed on their newer aircraft. The streaming entertainment, however, is free, had a lot of options, and worked well for me. 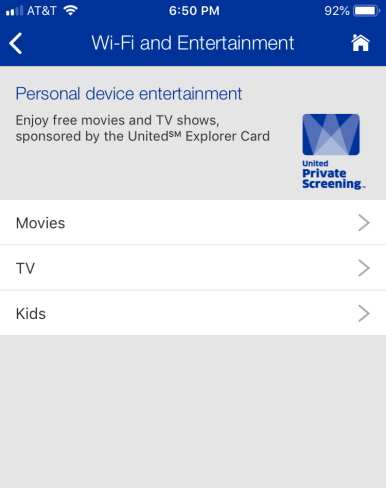 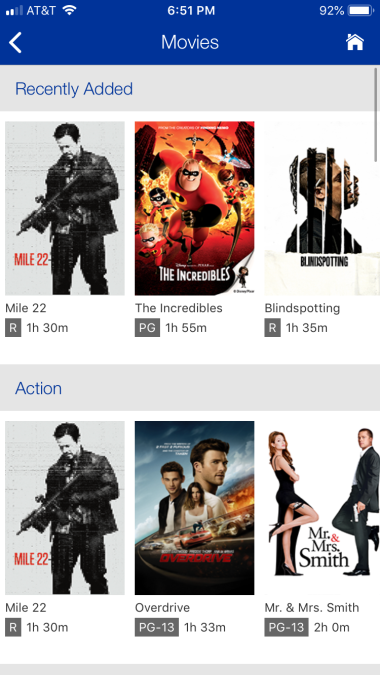 United’s 737-900s are equipped with Thales WiFi connection. The prices are listed below. However, a weird thing happened to me. All of a sudden, when I decided to try and connect to the Thales WiFi to see the costs, it started running for free. I could even surf the web, and it was pretty fast as well!

We started our descent around 9:35 PM Mountain Time. We had good views of Odgen and Salt Lake City on landing, passed by the runway (where we could even see other planes landing) and then looped around  to land on Runway 34L around 30 minutes early.

Salt Lake City has a very efficient airport. Within half an hour, we picked up our checked bag and had our rental car. I will talk about the airport in more detail and share some pictures in the next review.

Overall, this flight pretty much met my expectations. The legroom was tight, but other than that, I do not really have any complaints. The only really memorable thing, however, was the cool mood lighting. 🙂

Thanks for waiting so long since the last review; I promise I’ll try to post more often. See you soon in the next post! And of course, Happy Thanksgiving!