WOW Air is an ultra-low cost carrier that has been expanding like crazy since it first started flying in 2012. It is known for providing cheap service from the US to various European cities via their hub in Reykjavik, Iceland. However, they have never flown farther East than Tel Aviv. That is about to change.

According to Onemileatatime and confirmed by Wowair.com, starting in December, WOW Air will offer 3-5x weekly service from Reykjavik to Delhi. These flights will operate with the following frequencies:

These flights will be operated by WOW’s brand new A330-900neo, which they have not even taken delivery of yet, and at about 10-12 hours long this will be their longest route.

However, there is one piece of big news from this announcement. WOW Air’s introductory fares will start at $199 each way in Economy or $699 each way in Premium. Yes, you read that correctly. Sub-200 dollar fares from the US to India, which normally has a one-way cost of 2-4x that amount in either cabin.

However, as you’d expect, there are a couple of catches.

First of all, browsing through Wow’s website, these fares seem to only be available on a few select dates from mid-January to March, well after the holiday season has ended and before most Spring Breaks have started.

Even more importantly, as you may have even noticed in the photo above, WOW is an ultra-low-cost carrier that does not include anything other than a small personal item in the fare. If traveling from the US to Europe, leisure travelers can pack light, bring snacks aboard and not have to worry about any extra fees. However, realistically, when traveling to India most travelers will need some extras.

In order to show how these extras add up and compare them to a full-service carrier, I made two WOW air sample bookings and used one full-service booking as a control. I am using the dates 15-23 January for my round trip and am flying from Newark. Both low-cost flights include the discounted fare.

Here are the control flights, in which the round trip is $778, seemingly about twice the roundtrip price of the WOW flight (and notice how one of the flights are nonstop):

In one of the WOW Air bookings, I added just a checked bag, which is the minimum travelers will probably add onto the fare. The cost was about $540. Here it is: (and subtract $200 from the final fare. Don’t ask) 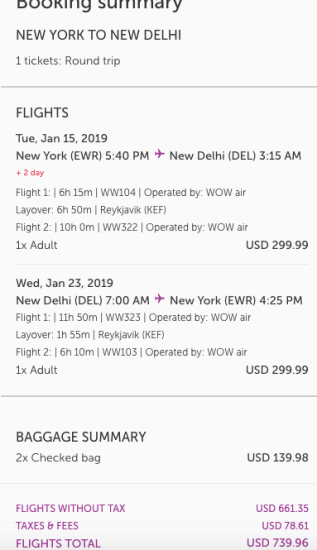 Already, you can see that the full-service cost is only about $200 more expensive that WOW air’s discounted cost with a checked bag. Now, in the second sample, I will add on all the things that are complimentary on United (which include checked bag, carry on bag, seat selection, meals, and inflight entertainment) and will even use the WOW plus feature to get an even more “discounted” price.

Because I added some onboard extras, I won’t show a picture, but take my word for it, the fare was about $752 round trip, almost United’s price. Is it really worth it to fly on a connecting flight on an uncomfortable seat for 15-hours of flying, plus the need for a lengthy connection (6 hours) in Iceland on the outbound when you can fly nonstop and avoid all of that for less than $30 more? And as an added bonus get better inflight entertainment and (probably) better food and drinks?

If you are flying light, this is an amazing deal, possibly one of the best in history on these routes (if not the best), at least until the deal goes away. It might also be great for people traveling from cities where flights to India are limited and expensive, even with a stop (e.g. Pittsburgh). Otherwise, it might be worth it to pay a bit more for a full-service carrier.

My guess is that at the beginning, people will fly this route. However, when the people traveling heavy realize what they are getting themselves into, they will steer clear next time, while the few people flying light will be how WOW will make their money (if they make much at all).

3 thoughts on “WOW Air Starting $199 One-Stop Flights from US to India!”